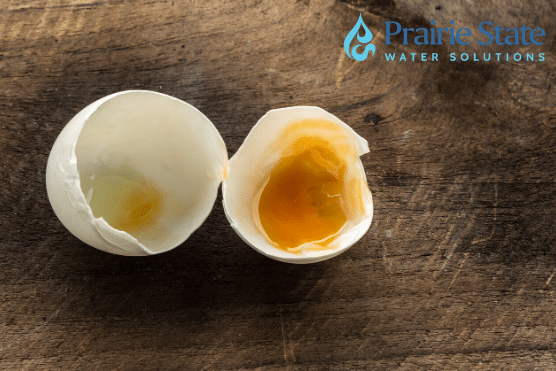 Imagine being at a family member’s home and turning on a faucet to wash your hands, only to find that the water has a smell that can be best described as rotten eggs. Later, you ask for a glass of water and find that it tastes as bad as it smells. Maybe you have this problem with the water in your own home and wonder what is causing it to have such an unpleasant taste and smell. More importantly, you wonder if it’s safe to use.

The problem we’re describing is the result of high levels of sulfur in the water. Hydrogen sulfide gas occurs naturally in some groundwater, typically where there is decaying natural matter. However, it can also be found in wells, and can even build up in your hot water heater. Sulfate is usually caused by a bacteria that builds up in the water pipes, and will cause the water to have more of a bitter or salty taste. According to the FDA, the extra sulfur in the water we get in our homes doesn’t pose any health risks, however, there are many reasons to have it removed.

The first is the most obvious … the unpleasant taste and smell. Not only is it undesirable to drink (making it hard to get in your eight glasses a day), but if you use the water to cook, it can alter the taste of the food, as well. Sometimes the odor only occurs when the water is first turned on, but is often worse when heated, making a warm shower or bath unpleasant.

Another problem is that sulfur is corrosive to metals, which means that, over time, it can cause plumbing problems. People with high levels of sulfur in their water also find that it leaves yellow stains on their kitchen and bathroom fixtures, as well as on their clothing. Finally, for some people, higher levels of sulfur can cause stomach upset.

There are two ways to eliminate sulfur from your water at home. The first is a Chemical Injection System using hydrogen peroxide. Most of us know that the chemical compound for water is H2O. Hydrogen peroxide is created with the addition of one additional oxygen atom – H2O2. The extra oxygen atom releases to attack bacteria in your water and reduce its presence. After losing the oxygen atom, you are once again left with H2O, but this time cleaner and more pure, with no additional chemical residue.

The second option for eliminating sulfur from you water is with an Ozone Generator. Ozone is three oxygen atoms bound together (O3), and is one of the most powerful sterilizers on the planet. When added to the Ion Pro Filters, the Ozone Generator uses air already drawn into the system, and converts it into ozone before it travels back into the tank. This chemical free system uses the additional oxygen atom to get rid of any unwanted elements inside your filter. Any unused ozone dissipates for an eco-friendly water cleaning system.

Now imagine having water that is bacteria and odor free, tastes good, and is easy on your home and your clothes. At Prairie State Water Solutions, we offer options for sulfur elimination that are best suited for your home, family and budget. Call us today at 1-630-864-7078 for a consultation with one of your water experts.

Back to Previous Page
Back to Blog
Related Categories: Sulfur Elimination in Water
Top
website powered by
Top